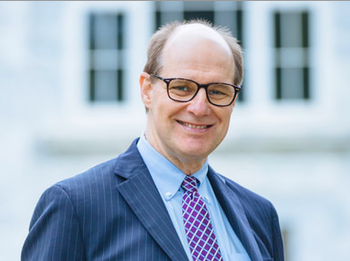 John Witte, Jr., J.D. (Harvard); Dr. Theol. h.c. (Heidelberg), is Robert W. Woodruff Professor of Law, McDonald Distinguished Professor of Religion, and Director of the Center for the Study of Law and Religion at Emory University. A leading specialist in legal history, human rights, religious freedom, marriage and family law, and law and religion, he has published 300 articles, 17 journal symposia, and 40 books.

Professor Witte’s writings have appeared in fifteen languages, and he has delivered more than 350 public lectures throughout the world, including, recently, the Franke Lecture at Yale, the Jefferson Lectures at Berkeley, the Pennington Lecture at Heidelberg, the Cunningham Lectures at Edinburgh, the McDonald Lectures at Oxford, and forthcoming the Gifford Lecture at Aberdeen.

With major funding from the Pew, Ford, Lilly, Luce, and McDonald foundations, Witte has directed eighteen major international projects on democracy, human rights, and religious liberty; on marriage, family, and children; and on law and Christianity.  He is Series Editor of both “Emory Studies in Law and Religion” (Eerdmans) and “Cambridge Studies in Law and Christianity” (Cambridge University Press), and he coedits the Journal of Law and Religion. He has been selected twelve times by the Emory law students as the Most Outstanding Professor and has won dozens of other awards and prizes for his teaching and research.

Professor Witte is married to Eliza Ellison, a theologian and mediator. They have two daughters and five grandchildren.